This blog post will be out of date in a week.

Twitterati, hashtags, followfriday and retweet sound to most people like an obscure dialect from an isolated Himalayan valley.

But to some, they are the suddenly familiar phrases of the 140-character world of Twitter.

Outsiders have caught snippets of course. There was the celebrated “There’s a plane in the Hudson”, with the photo that fizzed around the newswires several minutes before even the NY authorities knew.

And who failed to smile when “Don’t tell wifey” accompanied a photo of Demi Moore in her undies, pressing Ashton’s trousers?

Even the cerebral world of BBC Radio Four has enjoyed its fair share of Twoops – my suggestion for ‘scoops via Twitter’ – with political blogger Guido Fawkes breaking the news of the leaked Downing Street slur emails via Twitter.

It is of little surprise, therefore, that charities and their entourage of suppliers and umbrella bodies have flocked onto Twitter.

Heavyweights and many smaller causes, all punching at the 140-character weight.

And there has been much to excite charities – even in these opening months of 2009.

Twestivals – festivals in cities around the world, organised via Twitter – raised $250,000, which as the website states, “equates to 55 water projects in Ethiopia, Uganda and India, clean water for just over 17,000 people.” 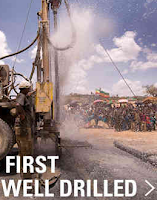 The charity that benefited? The almost unknown charity: water, whose profile has skyrocketed on the back of Twitter – most recently through being the beneficiary of half of actor Hugh Jackman’s $100,000 offered via Twitter.

Mr Jackman’s generosity would, in my view, have been worth more if he had offered $10,000,000, an amount he may have noticed leaving his bank account. As it is, for an outlay of AUS$100k (US$72k!), he has generated publicity worth much more than $10m, at a return on investment of which any fundraiser would be envious.

From one low profile charity to another. Malaria No More has enjoyed similar exposure through Ashton Kutcher’s face-off with CNN. The cynic may say that the offer of $100,000 to fight malaria if he gets one million followers was nothing more than another cheap publicity stunt. Doubled within the week by Oprah, in her high profile entry to the Twittersphere.

Interestingly, the narrowly-vanquished CNN later mused on these developments and wondered whether this hype foreshadowed the beginning of the end for Twitter.

Back to charities, then, and their burgeoning use of Tweets. As a vehicle to facilitate campaigning and supporter mobilisation, it seems perfectly suited.

However, I wonder how many of these charity accounts are simply the ‘new media team’ (as they are often still called, sadly) – unused by fundraisers.

Whether Twitter remains, or even truly becomes, the great fundraising vehicle it has the potential to be is hard to predict.

But one dimension of Twitter that fundraisers around the globe could tap into, and benefit from for as long as its popularity lasts, is its value in connecting people.

I was trying to avoid the ‘networking’ word, but that is really what Twitter is good for. Not in the traditional sense, however.

Twitter connects people by enabling them to reveal the intricacies of their lives to one another. Not the inane “I’m waiting for a bus” Tweets, although many seem to enjoy sharing such details, but rather the moments of reflection, discovery or achievement that would otherwise pass unnoticed.

Skim reading is essential, with hundreds of updates a day to filter, but tools such as TweetDeck make the job easier … and a little perseverance is richly rewarded.
Posted by Matt Parkes at 28.4.09