In reply to Mark’s post about the pound pack, I thought I would offer two additional perspectives. The first is as a client who bought it, and the second is regarding its power in legacy fundraising.

When I arrived at ChildLine, my incumbent agency was Bluefrog. I remember the concern I felt when I looked at the database and found thousands of donors who had only ever given £3.

“What sort of mickey mouse agency is this,” I remember saying. 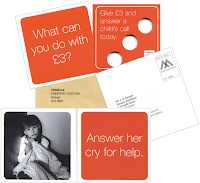 I was similarly sceptical when they came in to explain how it worked. I sat with arms folded, wondering how much more flannel they would spout.

But when I had seen a live campaign for the first time, my views changed entirely.

Like many others, I had dismissed the idea at the first hurdle. I was preoccupied with the low value cash gift, and failed to see the bigger picture.

In time, however, ChildLine had one of the most advanced and finely tuned mail acquisition programmes in the industry, generating thousands of prospects, thousands of mid value regular givers and thousands of core cash givers with each campaign.

And 'campaign' is the critical word in that sentence, as the pound pack approach is much more than a cheap tactical trick, but is instead a carefully refined strategy.

At ChildLine, in common with most other charities who used it, initial mail response was around 10%. (Bluefrog is still achieving 12% and more, e.g. for a cancer charity in November 2008.)

A significant percentage of these prospects can then be converted to regular giving via telephone and mail.

But what about those who don’t convert? At ChildLine, we developed the ‘nursery programme’ – a series of hard-hitting mailings that converted roughly 15% to the core cash giving file.

If, after six or nine months, they had still only given the original £3, we sent another pound pack. Response was well above 50%. And conversion calling to them generated more good quality regular givers.

Are you building the spreadsheet in your mind? It adds up.

What’s more, detailed trends analysis we performed on the database, broken down by recruitment source, showed the pound pack regular givers and core cash givers to be the most valuable on the file.

But why the mention of legacies?

A surprising picture is beginning to emerge of the power of this humble piece of direct mail. Three quick examples illustrate our discovery…

A young people’s charity which uses pound packs recently received a legacy of £500,000 from a taxi driver from Hornchurch who had given the organisation the grand sum of £1 several years before. He had resisted every attempt to upgrade, cross-sell or convert him. He had received Christmas card catalogues, legacy mailings and appeal letters. But his £1 remained his sole gift.

A large children’s hospital tested a pound-pack-to-newsletter-to-legacy-mailing strategy about five years ago. Responders to the pound pack simply received a newsletter to affirm their gift, followed by an ask for a legacy. Carefully targeted lists meant a strong response at every stage – and they have already recouped three times the original investment in legacy gifts from those responders.

Finally, only last night, at Remember a Charity’s advertising launch event, one of our clients – an armed forces charity – was telling me about a lady who responded to their pound pack two years ago. She had only ever given £1 to the charity, but when she died late last year she left £2.5million to them in her Will.

It would appear that the immediacy and interactive nature of giving pound coins via a simple card in the post engages even those prospective donors with little cash but great asset wealth – who may otherwise not make it onto a charity’s database.

Perhaps the most important lesson here is the reminder to treat every donor with care and courtesy – even those who only give £1 and who resist every subsequent ask for money.
Posted by Matt Parkes at 2.4.09

Your article is very helpful.Everyday your blog inspire me a lot and helped to develop something new like I have developed a new app :descargar spotify premium apk 2018 this is great and enjoyable.Thanks for the awesome posts , please keep updated regularly.