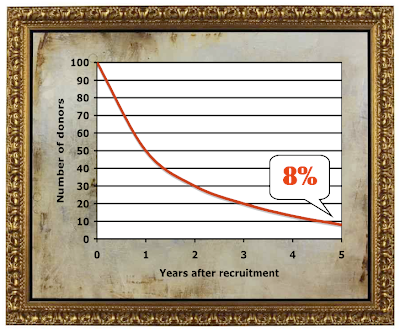 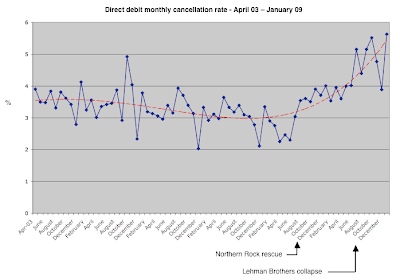 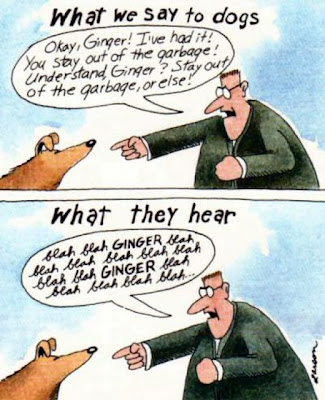 Before the recession, this sort of thinking was called ‘stewardship’. That phrase is outdated. This is now called ‘a formula for survival’.
Posted by Matt Parkes at 19.6.09 No comments:

The past few weeks have been even busier than usual, and blogging has been pushed into the background I'm afraid.

To avoid another day passing with no posts, I thought I'd share this email, which I received today, from a former team member - announcing some great news.

It struck me how important it is to spot and then harness talent, to avoid it being wasted. This person was in a role that didn't give any outlet for his creativity. I changed that, moving him into a donor retention marketing role, and he has subsequently shone in a similar position.

I'm glad I had the chance to manage him, and I'm sure he'll go onto great things. Anyone who writes emails like this to his mates will go far...

(I've anonymised it with XXXXs.)

Sometimes in life you've got to roll the dice. You've got to defy logic and all the evidence before your eyes, and go with your good old-fashioned gut instinct. You know what it's like. You're not sure why you're doing something, but you do it anyway. Think Kevin Costner in "Field of Dreams". If you build it, they will come… And 99% of the time you're right. At least that's what I've found.

Of course there are exceptions:

- When I hired XXXX
- When I hired XXXX
- When I said to my old boss "he's boring, but you can probably trust him" when she asked me about a potential new recruit. His name was XXXX. [he ended up moonlighting]
- When I stole booze from XXXX's house after her surprise birthday party
- When XXXX, XXXX and I decided to have a quick lunchtime pint in Brighton (after meeting a supplier) and 9 hours later I found myself on a train platform in East Croydon, smelling of sambuca
- When I started spread-betting (at the desk) on the Ashes on the first day of that really busy period in 2005

Anyway, there I am on my XX birthday last week. I'm looking at my finances and everything's screaming bankruptcy:

You beauty - a wedding. Of course. Hell they don't cost much, there's no stress and you can forget about it the day after.

So last week I proposed to XXXX and she said yes.

And in one swoop, all my problems were solved.

It's a beautiful thing.
Posted by Matt Parkes at 9.6.09 No comments: