The oldest trick in the book.

There were thirty people in each session, and it worked each time.

“Under six chairs, there are plates with big bars of chocolate on,” I began.

“Could those six people please unwrap the bars and pass the plate to their neighbour.”

Pupils began to dilate as the fresh aroma of quality fairtrade cocoa burst out. 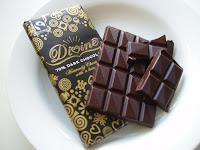 “Could the next person break the bar in half, and half again, and pass the plate on,” I continued.

Pulses quickened as everyone saw and handled the rich texture.

I repeated my commands until each plate was heaped with broken pieces of chocolate.

Breathing was slightly quicker as I made my final request, saying, “now would the last person please pass the plates to me.”

Slowly, to emphasise the decadence that was heaped before me, I emptied each plate to form a single mound of chocolate. The scene must have resembled an ancient fertility rite.

“Thanks very much,” I said, picked up a handful of chunks and stuffed them into my mouth. I chewed, and shovelled more chunks down the hatch.

But my smile brought warmth back into the room, and people laughed, more because of the relief in realising that they had been tricked, than at any humour.

“Feels awful, huh?” I said. “You do all the work and then I get all the fruits of your labour.”

And in one fell swoop, I acknowledged their feelings, and showed that I understood their frustration.

My conference session on ‘direct marketing and the regional fundraising teams’ was off to a good start. I handed the plate round for a well-earned cocoa fix.

Integration! Inte-what?
ChildLine, not unlike many charities around the world, faced a dilemma. Fundraising had grown from a regional, community fundraising model, and eventually incorporated a centralised, direct marketing function.

I was head of the latter and was, therefore, evil personified.

‘Silo culture’ is a term that pretty well sums up the mess we were in. The regional teams mistrusted the head office teams, and vice versa.

After all, it was the regional (and by ‘regional’ I mean ‘regional and national’, for readers in Wales, Northern Ireland and Scotland) teams who worked at the coalface. They worked evenings and weekends, organised events and built relationships with supporters … only for DM (read ‘unnecessary evil’) to send out a mailing to the furthest reaches of the land, and bleed all the money back to the centre.

It made you sick just thinking about them, in their swanky London office, with their ‘segmentation’ and ‘marketing agency’ talk.

And it was in these stark tones that I painted a picture of how dysfunctional our interdepartmental relationships were.

Someone licked the crumbs from a plate in the back row.

Distrust
With blood sugar rising, however, I knew I had them on side, and I began to tackle some more tricky issues. Like the fact that many of them held their own databases of supporters, and even mailed their own appeals in an attempt to boost local income.

The problems we faced can be summarised as follows:

If the regions vs. head office dynamic was bad, the community fundraising vs. direct marketing effect was terrible.

I illustrated this dynamic with the following diagram: 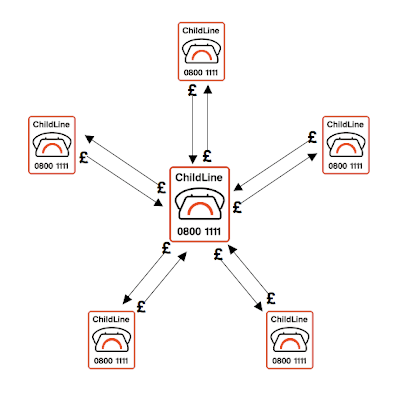 Does this resonate with your own experience?

The thing I firmly believed, and still do, is that it does not have to be this way.

And the primary reason it can, and must, work differently is that the donor does not see the internal silos that get in the way of integration and collaboration.

Silos
If you have children, and if you have read the books about farms, you will know that silos are not military bunkers; the word was only used in that context from 1958 in fact. Silos are tall steel containers (originally pits underground) where forage – grass and other plants from fields – is stored as a winter feed for animals.

Over time, forage in a silo slowly ferments and becomes sour.

And doesn’t that depict just what happens when departments stop talking to each other and retreat into their own small world?

For our part, I’m pleased to say that in ChildLine we did break down the silos.

We found ways of working together, and our fundraising grew.

It began with dialogue. Surprising how hard that can be to sit down to talk. But we did, and we agreed to be open.

Two examples of the successes we achieved stick in my mind.

We agreed that the regional teams could send an invitation for local events, e.g. carol concerts, to a selection of the central database from their local area.

Uptake was good, and just being invited seemed to have an impact – analysis showed an uplift in subsequent giving from those who had been invited.

The second example is from the low profile worlds of payroll giving and legacies. The Direct Marketing team worked with the teams in Scotland and Northern Ireland as they used local influence to join consortia of charities that promoted each type of fundraising.

In the old world, this would have been inconceivable, as the question “but where would the money go?” would have torpedoed any attempt even to discuss it.

However, we did reach agreement on how the income would be reported.

Pitfalls should not be obstacles
Things can go wrong, when an attempt at integration is made. For example, if access to the database is unrestricted, supporters’ needs are often forgotten. I think of one organisation we work with, who were alerted to a problem when a donor contacted the chief exec to ask why he had received more than 50 pieces of mail and email, without counting telephone calls, just because he was a direct-giving donor, community fundraising volunteer and campaigner.

But the reason for my conviction that this is the way forward is that in my experience, an organisation’s fundraising benefits. At ChildLine, now part of the NSPCC by the way, the income curve became steeper as this collaboration took effect.

What silos do you need to take down? And how can you replicate this integration, so that you too see the following vision that I set out in those conference sessions become reality? 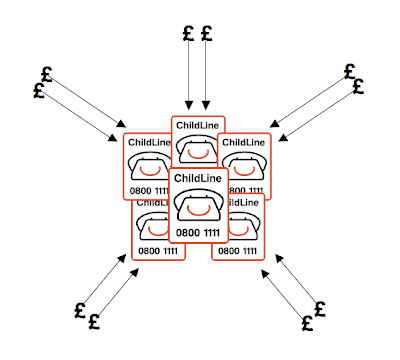 I would've been annoyed that you chose dark chocolate. Then again, I'm weird.

That said - the blog posting is positively delicious!

I feel like there is a scarcity of good marketing today. Good marketing means which can convert the leads into sales. The only marketing that has moved me in the last couple of years is Search Engine Optimization.

Earning money online never been this easy and transparent. You would find great tips on how to make that dream amount every month. So go ahead and click here for more details and open floodgates to your online income. All the best.

Earning money online never been this easy and transparent. You would find great tips on how to make that dream amount every month. So go ahead and click here for more details and open floodgates to your online income. All the best

Good marketing means which can convert the leads into sales. The only marketing that has moved me in the last couple of years is Search Engine Optimization.