The power of the image 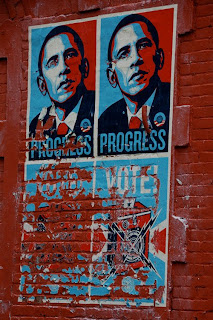 Strange that the first thing I write on photography begins with an illustration – albeit a photo of one.

This image deserves attention for many reasons.

It is among the best examples in history of the illustration genre of imagery. Clean and simple, with powerful use of colour to capture shadow and detail.

And its use among political campaigning seems very fitting. As does the way this particular photograph captures the gritty hard work of the campaign trail.

The eyes are on the top third. In fact, Barack’s eyes each sit on the intersection of the top horizontal third with each of the two vertical thirds.

Next, see the way he’s looking from left to right, tilting his head and looking into the picture. In fact, his left eye, sitting on the intersection of the top and right hand thirds, otherwise known as optical dead centre, is the point where one’s eye is drawn in the image.

We could dwell on the tight crop and shallow depth of field to make the background melt away, but that would be unnecessary, as the eyes have it.

PROGRESS and HOPE are both captured in Shepard Fairey’s iconic image. And this illustrator’s rise to even greater fame – let alone that of his subject – is well deserved.

Imagine what he could do with a camera.
Posted by Matt Parkes at 3.1.09