From anything to everything

A recent conversation between one of my colleagues in our legacies team and one of our clients’ donors went as follows: “Oh thank you for calling; I simply wanted to ask … how much can I leave to [charity name]?”

Slightly taken aback, but sensing a golden opportunity, he managed a calm reply: “Well, from anything to everything.”

“Oh good,” the lady said, “I’m so pleased. In that case, since I have no relatives, I shall leave you my entire estate of property, shares and cash.”

It struck me that this happy tale perfectly represents the way legacy fundraising is the confluence of three different streams of fundraising.

Over the years, this lady had been invited to supporter events, including project visits, but in fact had declined.

She had received direct marketing messages, including a recent letter, to which she replied with feedback on the reasons for her support, and an indication that she intended to include the charity in her Will.

On her reply form she had also ticked the box requesting an in-depth conversation with someone from the charity – entering into more of a major donor or planned giving type relationship, where her philanthropy could be unlocked with one-to-one contact.

As Stephen George of the NSPCC pointed out in a seminar at last year’s International Fundraising Congress (ifc) in Amsterdam, legacy fundraising often falls down because the fundraisers either come from a direct marketing background, and know little of major donors, or vice versa. And even fewer come from an events background – an area about which Iain McAndrew of Save the Children is so fervent an evangelist.

It is this combination of different facets that makes legacies such a dynamic and interesting area of fundraising. But for the same reason it is also one of the most challenging.

Given the potentially broad reach of the Remember a Charity social marketing strategy, about to be seen in a new advertising campaign, I anticipate charities seeing an uplift in enquiries and responses across the full spectrum of legacy fundraising.

If you find yourself in this position, will you be ready?
Posted by Matt Parkes at 28.3.09 No comments:

When I was a client, my Account Team was the agency.

My Account Director knew my strategy and helped build my budget. She somehow also knew what was happening in the detail. And she was good fun.

My Senior Account Manager was in charge of all the jobs running through the agency. Her role was to deliver each project on time, under budget and over target. And she did.

My Account Manager made it all happen. She was the one who knew exactly which change had been made by whom, when. And she delivered.

Sure, I loved meeting the creatives. I often had lunch with the CSD or MD. I enjoyed getting into the detail of the digital stuff. I was reassured by meeting the production team.

But they were all incidental serfs, at the beck and call of my Account Team - somewhere in the background.

When I reappointed the agency it was because they responded.

And as success built upon success, and as my managers and their teams gave positive reports, I knew my agency choice was right.

After a two-year absence, our televisions and radios shall once again crackle with this most serious of subjects. Or cackle this time round, as one of the most ingrained conventions of legacy marketing is upturned: humour has been injected into the creative.

And who has brought about such renewal?

As anyone who’s worked with him knows, Stephen George, the body’s Chair, and Development Director for Legacies at the NSPCC, is bursting with energy. And, although not single handed by any means, his leadership, imbued with this dynamism, has both held the consortium together and driven it in new directions.

A fierce advocate of research, Stephen refers to its importance in this new phase of activity in every interview or speech he gives.

A scratch beneath the surface of the new logo alone shows that care has been taken to pay attention to feedback from research.

But despite the now visible progress, RAC remains controversial.

Controversial for one reason: a two-year gap in advertising and a perceived lack of visible progress, combined with the challenges brought by recession, has focused the minds of most legacy fundraisers. RAC membership fees have been weighed even more carefully, and a number of members have pulled out, asking the question, “is it worth it – what else could I do with that money?”

But as the latest advertising campaign breaks, and the inevitable learning and research that will follow it emerges, non-members may well be left wishing they were involved.

Charity consortia often go through rocky patches, where the merits of membership are debated, and any advertising that is generated is scrutinised.

And there will be much to debate and scrutinise now.

The latest RAC campaign is built upon the principles of social marketing, where an attempt is made to change behaviour at a societal level, over time – think drink driving or stop smoking.

It works by using research to uncover the nuance in attitude that affects behaviour. In the case of drink driving, the most recent campaign was built upon an insight that people’s resolve not to drink too much is blurred in the moment they face a “just one more?” decision.

We wait with fascination to see the impact of this latest campaign on the world of legacy fundraising. It is a bold and exciting direction. And 'bold and exciting' is just what we need.

According to the RNLI's Charity Monitor, 41% of adults aged 65+ have made a Will. And 41% of those have included a charitable bequest. That still leaves three in five that don't ... and given that the average for the population is only 15% of Wills with a charitable gift, we face an enormous challenge.

But whatever controversy and criticism – or praise and admiration – this campaign generates, legacy fundraisers could do well to look at themselves first.

Will they be so focused on RAC, their enfant terrible, that the breaking campaign finds them not ready to capitalise on the enquiries and responses it generates?
Posted by Matt Parkes at 24.3.09 1 comment:

"They died as heroes"

"Cheryl flies in, Ashley jets out"

As fundraisers, how can we interrupt our audiences, when we compete with such sugar-rush media?

(The three lines above are on the same front page of just one of today’s free evening papers in London.)

Well in fact, Bluefrog seems to be interrupting rather well – despite the economic gloom. Recent recruitment of cash donors runs at 6% and £11 average gift for one client. And two-stage recruitment of committed givers runs at 12% initial gift and 9% conversion for another. And it is hard to keep up with our adwords and Facebook campaigns.

But our isolated success acts as counterpoint to the fact that Direct Debit cancellations are soaring, as Third Sector reports today.

Why is it that even stewardship-toting NSPCC is watching donors herd onto their online banks and cancel at such intensity?

There’s no romance left. One fundraiser recently said that signing up to a direct debit with his charity was like inviting a pack of vampires (if ‘pack’ is the right word) into your home.

But why have charities like the NSPCC allowed themselves to give in to the temptation to put their donors under such pressure? Like bankers peddling sub-prime debt, it seems that the quick wins of cash asks and upgrades has blinded many fundraisers into near oblivion.

What appears to have been lost is the focus on the donor.

What do donors need? 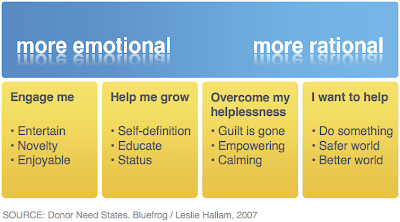 Our research has revealed that a typical donor has various needs – sometimes as simple as an impulse to help, sometimes as complex as needing to grow or to define themselves. If, through the course of a communication cycle, you can show that by giving to your organisation, their varying needs can be met, you are far more likely to develop a lasting relationship.

I will never forget the moment, many years ago, when I was sat in a launderette, waiting for my washing to dry. Mercedes, the chain-smoking manager, in the middle of doing a service wash for a customer, screeched in delight, “Elaine, ooh, Elaine! Look at this! ‘Ere, can you imagine picking a bloke up in a pub ‘cos you fancied him ‘cos of the bulge in his jeans, only to get him home and find he’s got a pair of these on?!” (Holding up a ‘loin king’ padded thong.)

Looking back, I can see there is a salutary – if a little obscure – lesson for fundraisers in that.

As stewardship guru Karen Osborne puts it, standard donor communications are just, ‘this is what we promise to do with your money’. “Stewardship,” she asserts, is, “‘this is in fact what we did with your money.’ It’s the delivery on the promise.”

Just as employing loin kings is generally an unromantic tactic, so too is the harassment of donors for short-term gain.

If you want to foster long-term relationships with donors, build a mutual exchange with them: one that is fulfilling and stimulating for them.

ActionAid – and other development agencies that offer child-sponsorship – boast industry-beating retention levels. They understand that for their richly rewarded donors, cancelling a direct debit would be like cancelling a part of themselves.

Take a moment today to look at what they do well, and think how to apply it.
Posted by Matt Parkes at 9.3.09 No comments:

Ever worked with a mood hoover?

Are you a mood hoover?

If you are, you need to dig into the pit of yourself and find a way to become solution-focused, rather than objection-focused.

If you have serious cause to be angry or miserable, you need to deal with it. You will become the cause of your own downfall if you don't, and you will see yourself managed out of your team or organisation.

No one likes working with a mood hoover, even if they laugh along with their negativity. Generally, people like to be around positive, successful, future-focused people.

And if you manage a mood hoover, you need to be brave and sit down with them to explain the impact they are having ... and set clear boundaries that give them no choice but to change.

Kelly's Heroes - to which I attribute around 65% of my personality, values and character - contains several moments of genius.

But the following scene (up to 4m 25s) is the best snapshot of the importance of positive waves I have ever seen.